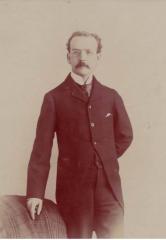 Our deepest respect and admiration go to James Woods Mallon, the grandfather of our Director of Operations, Angela Mallon. James’ rich history of a love for serving the public and passion for Access to Justice has driven Angela in all that she does as a member of the Legal Line team.

James Woods Mallon was an accomplished lawyer with an impressive career in the law in Toronto in the early 1900s. Born on January 20th, 1864, James Woods Mallon earned a Bachelor of Arts degree and an LL.B. degree from the University of Toronto before being admitted to Osgoode Hall Law School in 1890. He was called to the Bar in 1893 and appointed a King’s Counsel in 1921.

Mallon practiced with the firm of Ross, Cameron and Mallon, and with Francis A. Anglin in the firm of Anglin and Mallon. From 1902 to 1922, he worked in the Department of the Attorney General as Inspector of Legal Offices and Inspector of Registry Offices. He became Registrar of Deeds of the County of York in 1922. He served as chair of the Toronto Collegiate Institute Board, now known as the Board of Education.

In the late 1890s, Mallon served as Treasurer of The Legal and Literary Society – the official student society of the Osgoode Hall Law School.

According to the Law Society of Upper Canada archives, “Students had to be elected to their positions. Cards like (the one below) one would have been handed out as part of a campaign strategy in 1891. Candidates under this ticket promised to expand the student library, establish a gym, found a student club, and create two new scholarships”.

Love of THE LAW runs in the Mallon blood.